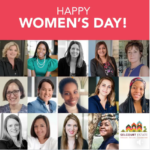 Today we commemorate the strong women who help build communities and make our homes warm and safe. May we now them, may we raise them, may we be them.

Women’s Day marks the anniversary of the great women’s march of 1956, where women marched to the Union Buildings to protest against the carrying of passbooks.

On 9 August 1956, about 20 000 women marched to the Union Buildings in Pretoria to protest against legislation aimed at tightening the apartheid government’s control over the movement of black women in urban areas.